There’s an increasing trend in ownership of dogs that resemble wolves. It’s thought the Game of Thrones is partly to blame, with its popular Direwolf pups, but sadly not all owners have been able to provide the right homes for these independent, athletic dogs, Dogs Trust reported that between 2010 and 2018 the numbers of Huskies coming to their care increased by 420%.

In some cases, these dogs look so much like wolves it would be hard to tell the difference. Actual wolf hybrids are now allowed in the UK so long as they are three generations removed from the wild animal, so numbers are growing. However, these dogs can be difficult to manage and have the potential to be dangerous or destructive within a family home setting. There is also some recent concern amongst the scientific community about the management of these hybrids. It’s known that these dogs could mix back into the wild populations and have the potential to affect conservation issues and possibly the loss of the wolf species, so there is some debate over how these dogs should be treated if found wild.

At the other end of the scale, are the wolf-resembling family pets. A Pomsky is a mini-cross between Siberian Husky and a Pomeranian, or the Goberian (Husky cross Golden Retriever) a striking medium-large dog designed to fit into an active family environment. 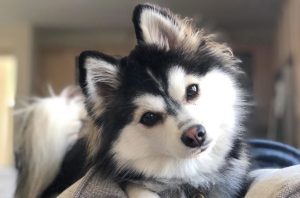 In summary, these are all beautiful, striking and natural looking dogs with new crosses emerging all the time. However, their needs aren’t the same as for other breeds and not all will suit a family home, so potential new owners need to do their research and understand exactly what ownership will mean for them.