This good-natured gundog breed is just as popular as a family pet as it is a working dog. Read on to find out more about the rather odd history of the English Cocker Spaniel. 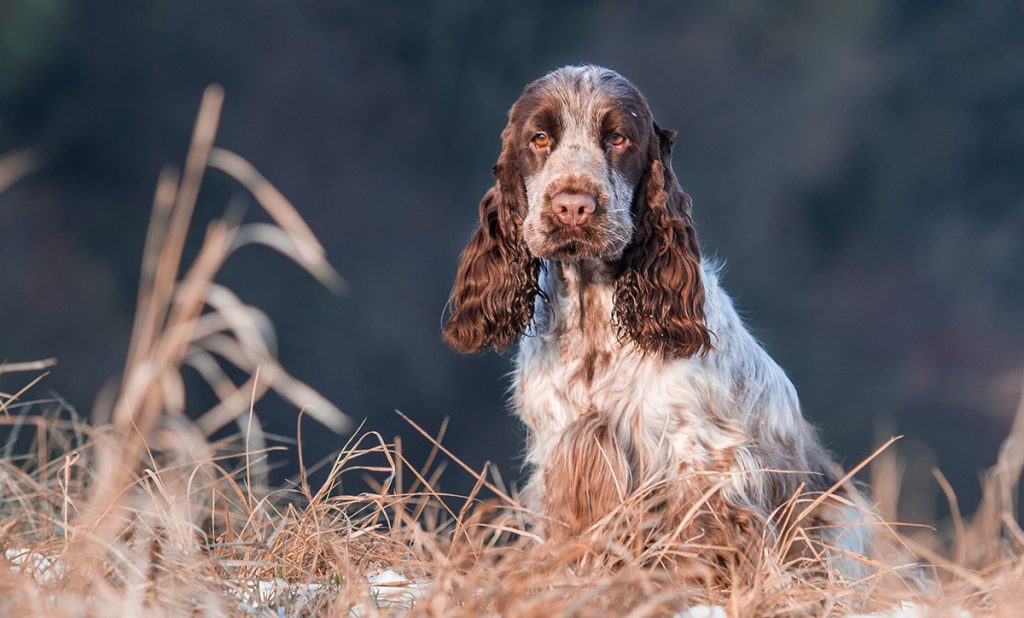 History of Breed: Spaniel-type dogs have been around for at least 500 years as is evident in art and literature. Originally, spaniels were simply either Land Spaniels and Water Spaniels. Breeders would split litters of spaniel pups according to weight into varieties and uses. During the 19th century this began to change as divisions grew and breeding accentuated certain characteristics. Initially, a Cocker Spaniel was any spaniel under 25lb in weight and their name came from their skill in hunting woodcock. Small Sussex Spaniel pups received Cocker Spaniel designation. Welsh Springer Spaniels were originally Cockers until 1903 when their larger size and shorter ear reclassed their status as Springers. The Field Spaniel descended from Cocker Spaniels.

Cockers share many characteristics with the Springer Spaniel, but are smaller in frame with lower-set ears. The American Cocker Spaniel descends from the English Cocker. The two appeared in the show ring together until the 1930s when they acquired separate breed standards. The American Cocker has diverged slightly from the English through breeding. It has a shorter snout, domed head, larger eyes and a different grooming style for the coat.

Traditionally, the spaniel group of gundogs do not retrieve game. Rather, their exuberance and stamina is perfectly channelled into ‘flushing’ game from undergrowth. However, it is possible to train these intelligent dogs to retrieve as well as flush.

Features: The English Cocker Spaniel is sturdy and compact with a merry, bustling action and constantly wagging tail giving the breed the nickname ‘the merry Cocker’. The eyes are full, but not prominent, dark brown or brown with a characteristic alert yet gentle expression. The ears are lobular and set low, level with the eyes. They should reach to the nose tip when extended alongside the muzzle. The coat is flat and silky in texture, with feathering on forelegs, body and hindlegs. It comes in a variety of colours, either solid, particolour, bicolour, tricolour and roans in varying shades. The tail has feathering if undocked and is carried level with the back, never curled over.

Energy Levels/Exercise Required: As one of the smaller gundogs, the English Cocker needs less exercise than other gundog breeds. Approximately one hour of exercise per day for the Cocker, compared to two plus hours per day for Springer Spaniels, Labradors or the big HPR breeds. Exercise should consist of activities that reflect their natural instincts, such as finding hidden toys or following hand signals to find toys.

Potential Health Problems: Generally a robust breed, hip dysplasia, luxating patellas and dilated cardiomyopathy are the main potential health issues affecting the breed. Hip dysplasia is an inherited condition exacerbated by over-exercising puppies, allowing them to jump or go up and down stairs too soon and allowing dogs to become overweight. Carrying extra weight puts strain on bones and joints as well as vital organs. Feeding to condition with a nutritionally-balanced dog food containing a bone and joint complex could prevent the early onset of joint conditions. Dr John Titanium caters to working dogs and contains New Zealand green-lipped mussel extract, which is a natural source of chondroitin and glucosamine and helps maintain joint health. In their early life, Dr John Puppy provides a different mix of nutrients that promotes healthy growth during this crucial period.

Rage syndrome is an extremely rare ailment affecting Show Cocker Spaniels more so than other spaniel breeds. It displays as a sudden, savage attack during which the dog’s eyes glaze over and it appears to be unaware of its surroundings. Although rare, it is something potential owners should inform themselves about.

Temperament: The English Cocker is full of the usual spaniel exuberance and boisterousness, yet is also gentle and affectionate. Highly intelligent and loyal, it tends to form a strong bond with one family member. The breed responds well to gentle, positive training and can be nervous of loud noises and rough handling.

Child Friendly/Family Dog: With its friendly and affectionate nature, intelligence and spirit, the English Cocker Spaniel makes a perfect family pet. With early socialising, the breed is good with children, though adults should always supervise dogs and children. As a smaller dog, it is happy in a small to medium house with some outdoor space to run off excess energy. Suitable for town living as long as there are open spaces nearby, such as parks or beaches.

The information in this breed profile comes from The Kennel Club, Wikipedia and Dorling Kindersley’s ‘Complete Dog Breed Book’.