Following on from our interview with Karen Fisher about her search and rescue dog, this article concentrates on another canine career, that of the sheepdog. This time I was chatting to Karen Robinson, a Weardale sheep farmer. Karen claims not to be an expert on sheepdogs, but having owned sheepdogs since she was a child and worked them on her family’s farm I think she more than qualifies as an expert! 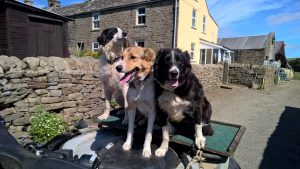 Pip, Fly and Jen ready to go on the quad bike

Can I get a bit of background knowledge first Karen? Tell me about your farm and your dogs.

My husband grew up down the road from here and we took possession of this farm in 2000 when the previous owner was ready to give it up. We have about 300 acres and farm Swaledale sheep and we also have 30 head of cattle. We have two children, my son Sam lives at home. He’s a shepherd with two Border Collies of his own. My daughter, Rebecca, used to train the collies for agility. She’s not so in to farming and her own dog is a little pooch. Between us all we have six Border Collies, a lurcher and Rebecca’s little dog. The collies range from one year up to about nine years of age. We recently lost one of our old dogs at about 13 or 14 years of age.

So, do you breed from your dogs or buy them as puppies? How can you tell if you have a ‘good’ sheepdog?

One of our dogs fathered a litter. He was a fantastic sheepdog and won awards and we really wanted pups from him, but he only fathered one litter and we managed to save the one pup for ourselves that turned out to be no good. It’s a bit of a risk getting a sheepdog pup. Just because a pup has two great sheepdog parents it doesn’t mean they have ‘eye’. That’s what you have to watch out for. They call it ‘eye’. You can tell when the dog is amongst sheep, if they’re mad keen, watching them or want to chase them, they have eye and can be trained up. If they’re not interested in the sheep, they’ll be no good. We’ve tried to train dogs that don’t have eye and it’s impossible.

You can’t always tell if a dog has eye until they’re older and then if they haven’t you have to rehome them. I refuse to rehome them for free, because I know they’ll go to a really good home if someone has to pay for them. They’re good dogs and make great pets, they just won’t be able to be worked. Floss is our youngest dog, she’s about one. We got her at 8 weeks old and it’s a risk, but her parents were both champion sheepdogs and she’s got eye.

Where do you get your pups from?

We get them from friends, just word of mouth if someone has a litter of pups. And there’s a big sale at Skipton, where people sell sheepdogs from pups up to working dogs. They have a big ring and put some sheep in the ring so people can see the dogs with the sheep. Trained dogs can go for thousands. It’s expensive to get a puppy up to working standard, about £1000 when you take into account the food they eat and everything. 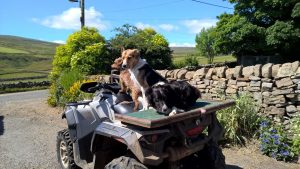 Do you think Border Collies make the best sheepdogs? Can any other breeds be worked as sheepdogs?

As far as I am aware, the Border Collie is the main working sheepdog used in this country. However, the Bearded Collie is also occasionally put to work, as is the Huntaway, which barks on command and can move large flocks effectively. They are big, strong dogs and are used more in New Zealand, but I knew a chap who had one here and it worked well for him. There is also a Kelpie, which is the Australian version of our Border Collie. It is sometimes found in this country, but rarely compared to other sheepdogs.

What does training a sheepdog involve and how long does it take?

It can take anything from a few months to a couple of years depending on the dog, usually about a year. You just take them out to work with you in the fields from a few months old. They follow the older dogs and when they go in a direction you shout the right command and gradually they associate the command with the action. It’s possible to train them without an older dog for them to follow. 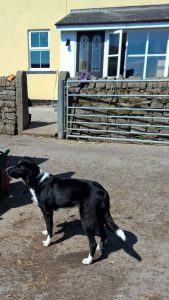 How long does a sheepdog work for?

They work until their legs go really. As they get older, we find them little jobs to do and use the younger dogs more. Older dogs can go a bit funny and set in their ways. It can be aggravating when you’re telling an older dog to take the sheep somewhere different to where they usually go and the older dog will insist on taking them where they want however much you tell them!

How important is diet to your dogs?

Very important. We tend to feed a good quality working dog mix, which we trust to have all the essential requirements the dogs need. We never use supplements as a rule, but after a lot of hard work, the dogs never say no to a treat or two!

Lastly, what do your sheepdogs mean to you and your family?

They invaluable. I don’t know how some people manage their sheep without dogs, especially at lambing time. We sometimes need to go into a field and separate a ewe and her lamb from the rest and the dog will do that for us in a minute. They’re a pretty good tool to the farmer and the more work they get the better they become. To my son, who’s a shepherd, his dogs are his best friends. He goes off to work on his quad bike and they jump up right beside him, one on each side. It makes a nice picture. They have a special bond with their masters, sheepdogs. My husband’s dog, Pip, worships his master. If I’m meant to be having him, he’ll always go to his master over me. It’s a very special bond and we couldn’t do without them.

Thank you for speaking to me, Karen.