This German scent hound breed may be small, but what the Dachshund lacks in size it makes up for in character. Our latest breed profile focuses on the ‘sausage dog’ with the excellent nose. 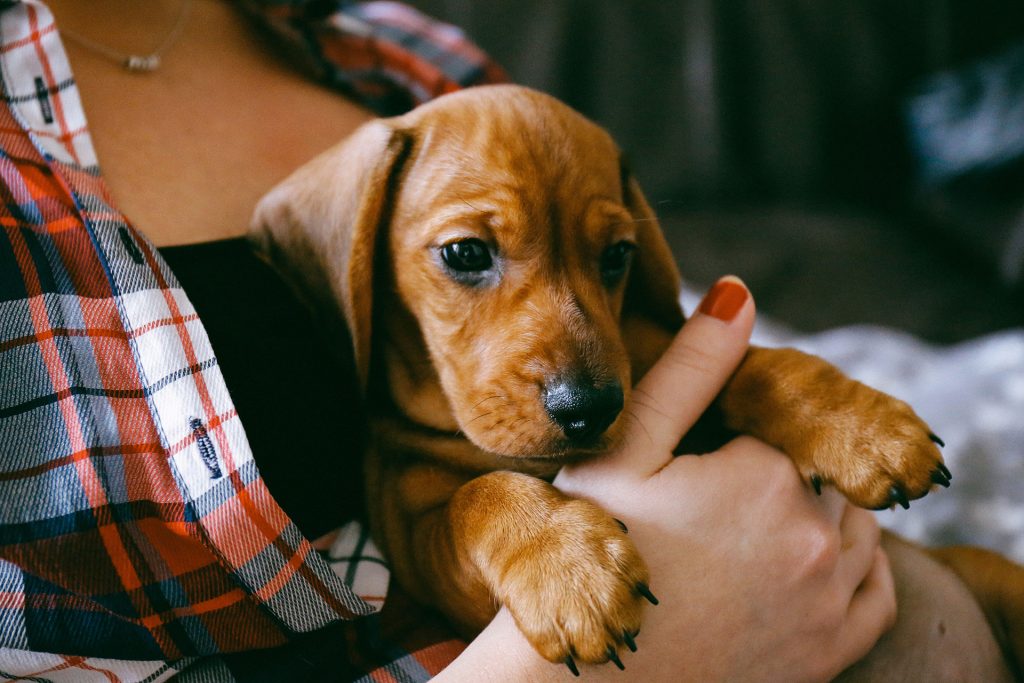 History of Breed: The word ‘dachshund’ literally translates as ‘badger dog’ in German, although in their native country they are referred to by the nickname ‘Teckel’ or ‘Dackel’. Their original use was to track and hunt burrowing game, such as badgers and rabbits. Their excellent nose has also led them to be used for tracking larger game, such as deer.

Features: The Dachshund gets its nickname of ‘sausage dog’ from its characteristic long, low-slung body. However, this aspect of their appearance should not impede them from free movement. There are three coat types: smooth-, long- and wire-haired. The coat colours vary hugely, though breed standards are stricter. All colours except white are permissible. A small patch of white on the chest is permissible but not desirable. Dapple is acceptable as long as neither light nor dark areas dominate. Double dapple, pied, tricolour, isabella and blue are highly undesirable, according to breed standards.

The forefeet are bigger and broader than the hindfeet. The pendant ears are feathered in the long-haired variety and smooth in the others. Eyes are almond-shaped and dark, though lighter in chocolate colours. Long, clean neck leads to a ‘conical’ head (when viewed aerially). The tail continues on the same line of the spine without curving up too high nor dropping to the floor.

Energy Levels/Exercise Required: The Dachshund might be small, but it has lots of energy and requires about an hour of exercise per day. Like all dogs, a lack of sufficient exercise can swiftly lead to behavioural problems. As a scent hound, the Dachshund will love activities that exercise its natural instincts, such as hide and seek games.

Potential Health Problems: Prone to spinal problems, such as invertebral disk disease (IVDD), and joint problems, such as luxating patellas. These problems will worsen if a dog carries excess weight, so feeding to condition with a nutritionally-balanced dog food is vital for this breed. Gilpa Trinkets caters to smaller, active dogs and is perfect for the Dachshund. It has a smaller biscuit size to suit a smaller mouth. If excess weight is already a problem, a lighter, maintenance diet, such as Dr John Silver Chicken, should help with weight loss. The breed is also at risk from several inherited diseases. Breeders are working on eliminating these from the breed, however potential owners should ask breeders about DNA testing and the health of both parents.

Temperament: Dachshunds have a tendency towards stubbornness, particularly when following a scent. They have a loud bark, which can become problematic without proper training. They are loyal and protective of owners and wary towards strangers. Despite these downsides, the breed is also cheerful, loving and fun. As for trainability, EB White famously claimed that ‘I would rather train a striped zebra to balance an Indian club than induce a dachshund to heed my slightest command’.

Child Friendly/Family Dog: With thorough socialisation, the Dachshund is good with children. They are happy in a small home with some outdoor space to run off excess energy. As with all scent hounds, they will follow a scent to the bitter end, so outdoor areas must be secure.