The German Shepherd Dog, or GSD, is famous for it’s herding, tracking and guarding abilities. Read on to find out more about this versatile, working breed from Germany. 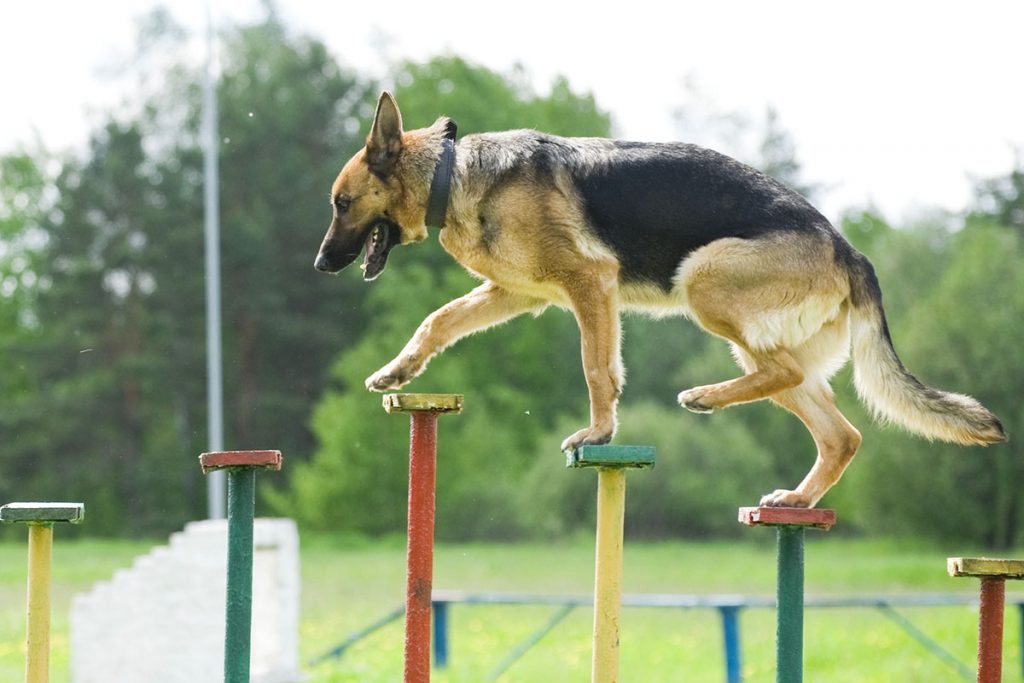 History of Breed: Formerly known as the Alsatian in the UK, the German Shepherd Dog originated in Germany in the late 19th century, making it a fairly new breed in the dog world. As the name suggests, it was traditionally a shepherd dog, used for herding and guarding. These attributes, combined with its intelligence, make it popular with the police and armed forces today. It also makes a great guide dog for the blind or visually impaired.

Size: A medium to large dog, weighing approximately 22-40kg and measuring from 58-63cm in height.

Features: The German Shepherd Dog is easily recognised by its large, erect ears, bushy tail and typically black and tan coat. The head shape is clean-cut, with a gradual slope down to the wedge-shaped muzzle. The double coat is weather-resistant in black and tan with a darker saddle on the back and can be short or long-haired. The powerful body is long in proportion to the height, giving a long, striding, fluid gait.

Energy Levels/Exercise Required: A high energy breed, the German Shepherd Dog requires more than two hours exercise per day. As a working dog, it will be happiest when it is using its instinctive herding skills or being useful. Games and activities that provide mental as well as physical exercise are perfect for German Shepherds. These could include flyball, agility, Rally-O, or bike/skate joring.

Potential Health Problems: Hip and elbow dysplasia is the most common health problem for this breed. Carrying excess weight and over-exercising as a puppy can exacerbate this genetic condition. Therefore it is essential to avoid too much exercise and jumping down from heights in puppyhood. Feeding to condition with a balanced diet that contains a joint and bone complex, such as Gilpa Kennel, or Dr John Gold,  is also advisable.

Other potential health issues include Von Willebrand’s disease, a blood disorder, and also EPI (Exocrine Pancreatic Insufficiency), a degenerative disease of the pancreas. Pancreatic supplements are the usual treatment for EPI. Degenerative myelopathy is a neurological disorder affecting the spine, causing weakness and a loss of coordination in the rear limbs. Potential German Shepherd Dog owners should request health checks and DNA tests to rule out or identify these disorders before committing to taking on a puppy or dog.

Temperament: Responsible owners who put effort into socialising and training will reap the rewards in owning a highly intelligent, obedient dog with a loyal, trustworthy nature. Whilst the German Shepherd Dog occasionally has a bad reputation for being aggressive, this should not be the case with a reputable breeder.

Family Dog/Child Friendly: If properly socialised, German Shepherds make good family pets and will be particularly protective of family members. They are happiest in a busy, active household. In addition, a large house and garden will be a huge bonus. As well as daily exercise, German Shepherds benefit from having plenty of outdoor space to run off excess energy.