The Siberian Husky is a spitz-type breed of dog with a reputation as the lightest and fastest sled dog. Given plenty of exercise to burn off all that energy, they also make calm, loyal companions too. 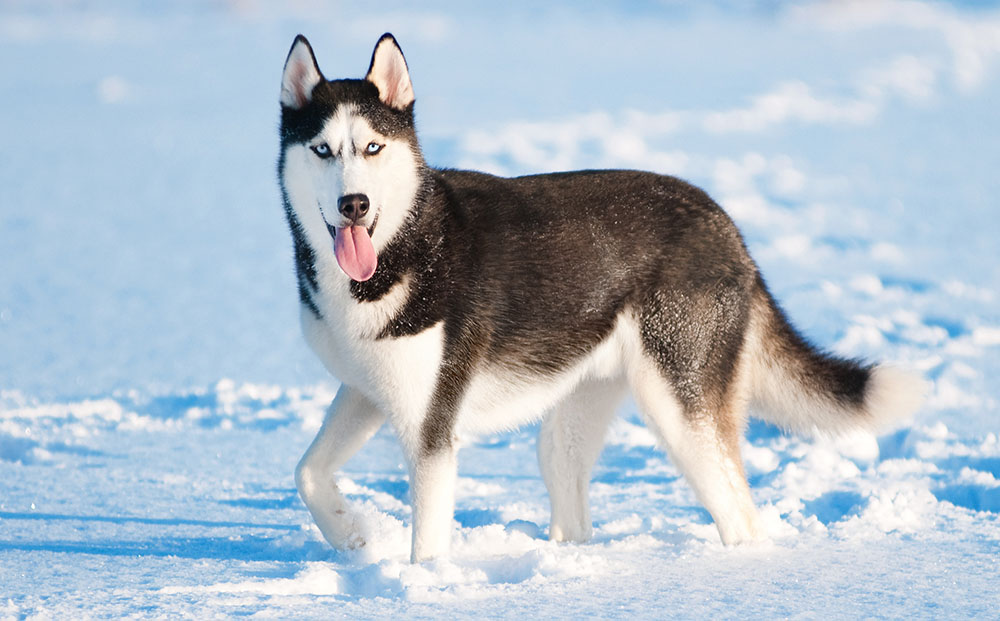 History of Breed: Originating in northeastern Siberia, the Siberian Husky is also known as the Chukchi sled dog. This name comes from the Eskimo tribe that used the breed for hauling their sleds and for hunting. The Chukchis led an isolated life and only bred from the best lead dogs, therefore the breed’s gene-pool stayed undiluted for hundreds of years. Due to the dogs living closely alongside the tribe, they also bred dogs for their temperament. The Siberian Husky is still one of the most popular dog breeds in the Arctic areas thanks to their endurance and resistance to the cold. They pull sleds for Arctic expeditions and excel in sports such as dogsled-racing. They are also popular elsewhere in the world with owners who love a companion for their active, outdoor lifestyle.

Features: Like all spitz-type dogs, the Siberian Husky bears a striking resemblance to its ancestor, the wolf. It has a shorter face than the wolf, more fox-like in shape with a muzzle that tapers gradually to a rounded nose. Triangular, erect ears give the breed its alert, intelligent expression. The eyes are almond in shape and come in blue, brown, one of each colour or parti-coloured. The body is straight and strong and should reflect a balance of power, speed and endurance. The dog should not look too bulky nor too fine and lightweight and the gait should be smooth and effortless.

The characteristic coat of the Siberian Husky has a double layer to make it especially resistant to low temperatures. The undercoat is soft and dense, whilst the top coat comprises short, straight guard hairs. Interestingly, the topcoat also reflects heat in hot weather. The tail is well furred and shaped like a fox brush. The coat comes in all colours and any markings are permissible by breed standards. Siberian Huskies usually have white markings on the face, paws, legs and the tail tip. Some of their striking markings are unique to the breed.

Energy Levels/Exercise Required: The Siberian Husky is famous for its stamina and high energy. It requires more than two hours vigorous exercise every day to maintain its health and prevent behavioural issues. This should consist of activities that exercise their natural instincts and provide mental as well as physical stimulation. Traditional dog sled-racing is naturally confined to snowy climates and seasons, however there are similar activities that emulate this sport. These include bikejoring and cani-cross, though something as simple as allowing a husky to pull you along on a skateboard would give satisfaction and reward to this breed.

A high-energy, working breed needs a dog food to match, one that provides all the essentials for a long day pulling sleds. Dr John Gold or Titanium cater to working dogs, with higher protein levels and a bone and joint complex to boot. They also contains manganese for ligament health and zinc for good eyesight.

Potential Health Problems: Generally a hardy breed, the Siberian Husky is only susceptible to a few genetic diseases of the eye and seizures. Despite being a working breed, they are at low risk of developing hip dysplasia. Dogs used for sled racing can be prone to some gastric conditions and bronchitis.

Temperament: Like many sled-hauling breeds, the husky is primarily a pack dog with a strong pack instinct. They need companionship from humans or other dogs and dislike isolation. The Siberian Husky is alert and friendly, yet also gentle and loyal. They learn well with consistent and positive training.

Child Friendly/Family Dog: With early socialisation, the Siberian Husky can make a good family dog. They are perhaps better suited to families with older children who enjoy an active, outdoor life, but are also gentle with small children. As a breed with high energy levels, they are happiest in a large house with a large outdoor area to burn off excess energy. They have a strong instinct to hunt small, furred and feathered creatures, so are definitely not suitable for households with hamsters or budgies!