Story of a Rescue Dog – Bonnie The Golden Retriever

Giving a rescue dog a home reduces the pressure on overburdened rehoming centres as well as having its own rewards. However, a rescue dog with an unknown history can pose a real challenge to dog owners. We spoke to Vicki Trigg about the potential problems, hard work and rewards that can accompany a rescue dog. Vicki is the owner of rescued Golden Retriever, Bonnie. 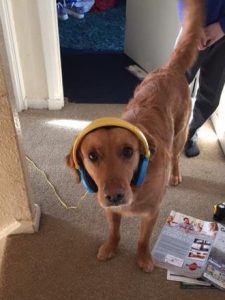 Could you tell us a bit more about Bonnie’s background?

Bonnie was about 19 months when we got her. We initially thought she was younger as she was very small, but our vet managed to track down her initial vaccination record and and was able to estimate her birth date from that. We got her from Labrador Retriever Rescue Scotland (LRRSS). As the name suggests, they usually deal with Labs but they occasionally get other working dogs in as well. Bonnie’s route was quite unusual as she never went into the rescue itself. She originally belonged to a family in Inverness who couldn’t manage her, then went into foster. They couldn’t keep her long term so she ended up in kennels near Dunblane. She was there quite a while before the rescue discovered her and got in touch with me. Due to this, her behavioural issues weren’t noted as Carolyne, who runs the rescue, never actually met her.

It wasn’t until we had her for a little while that we realised she had some problems. She’d had minimal training, no recall training at all, she’s reactive to some other dogs and she’s incredibly hyperactive. She also has a very high prey drive, which is just fabulous when you live in an area surrounded by farmland! It’s very rare she can be allowed off lead, which is a shame as she’s got so much energy that she needs to run off. We think she spent an awful lot of time crated as a puppy as she goes up on her front paws and wees against a wall (like pandas wee on trees!) rather than squatting, which is indicative of her learning not to soil her sleeping area.

She’s also very small for a Golden and is consistently underweight no matter how much she eats. She’s got a clean bill of health so there’s nothing underlying. The vet just thinks she didn’t get the right food when she was growing. We also call her our Dory Dog as you give her a command and she’ll forget it straight away. This is very unusual for the breed, so it does look like she didn’t get everything she needed nutrient-wise as a pup.

What made you choose a rescue dog given your experience of owning your black Labrador Retriever, Layla, from a puppy?

We really wanted to get a companion for Layla and my family has sort of a ‘waifs and strays’ history, with various animals from all over ending up living with us! We had our pedigree but then we wanted to give another dog a second chance.

I’m guessing it’s important when dealing with a rescue dog’s behavioural issues to avoid confusing them further. What has been the key to dealing with Bonnie and how successful do you feel it has been?

Bonnie is a pain in the backside because she’s wonderful for dog trainers! Any time she gets 1 to 1, she’s an absolute star. It’s when there’s more people and more dogs around that she loses the ability to listen to or react to commands. She’s a working dog so if you give her a task to do, she’s happy and will complete it unless her instincts take over (i.e. there’s sheep). You can definitely teach an old dog new tricks but it’s a lot harder. We’ve never stopped reinforcing good behaviour with her though and it is paying off.
She can finally walk past another dog (on lead) without barking and pulling. The recent big break through has been her obeying the command to lie down and stay while our degus are out of the cage. She has two big strings of drool coming from her mouth but she doesn’t chase them! There will be some issues I don’t think she’ll ever overcome though as we don’t know the reason behind them, mainly the reactivity. Some dogs she’s fine with but others she’s incredibly reactive to; there doesn’t seem to be a pattern.
Training, reinforcement and a lot of love have been the key in dealing with Bonnie. She had a very unstable first 18 months and she still has separation anxiety and trust issues. I’m glad we have Layla as I don’t think Bonnie could cope as an only dog. She can’t cope with me leaving the room and has to follow me and I think she’d be inconsolable if she was left on her own when I went to bed or went out.

Many people with children or other pets worry about how well socialised a rescue dog could be. Was this a concern for you?

It’s hard to rescue a dog when you have young children as most rescues say no to anyone who has kids under 10. I actually found out about LRRSS out on a dog walk from talking to somebody walking their Lab, who was a rescue and they hadn’t had any problems with having younger children. There’s never been any problems with Bonnie and the children but then our kids know how to behave around animals. I think it’s all about responsibility and teaching children how to behave. Regarding other animals, it’s all about observing, taking introductions slowly and just being sensible.

Responsible dog owners understand that training is an ongoing aspect of owning a dog. Roughly how much time do you spend training per week and how do you fit this in to your routine?

Training isn’t a separate “this is what we’re doing now” thing. Training happens all the time. It’s when I talk to them on walks to let them know I’m in charge. Or when I make them sit at a road and look at me before we walk across. It’s when we put their food down and make them wait until we say they can eat. Only for a few seconds but that’s a huge test of willpower for Retrievers! It’s when we can get out to Loch Lomond on the stretch where I know there’s no sheep and few other people around and I let them off lead but randomly call them back to me, just so they know that they’re not off on a jaunt on their own. Training doesn’t stop after puppyhood and I think having a rescue with no training has really driven that home.

What are your thoughts on the effects of diet on behaviour?

Diet definitely influences behaviour. Not only is it important that puppies get a good quality balanced diet to help their physical development, if they don’t get the right nutrients it can effect their mental development too. Personally I’m a big fan of raw food for dogs although we no longer feed them raw as it was becoming financially prohibitive. I think it’s probably more cost effective for people who can source the meat and bones locally. We now use a food that is wheat free, with high meat content. I cringe when I see people buying brands that are minimal meat content and pumped full of additives. There’s much more awareness now of how food effects behaviour and there’s better food out there still at reasonable prices.
If someone was considering getting a rescue dog, what advice would you give to ensure the best chances of success?

I would advise anybody looking to rescue to make sure that they’re prepared for the long haul. There’s been times I’ve regretted adopting Bonnie as having her has changed our lifestyle. We can’t go for the long walks in the local area anymore as she can’t go off lead where there’s any livestock in the vicinity or where other dogs may surprise us suddenly. She has squeezed under fences and run across multiple fields to try to chase sheep which I thought were safely in the distance.

We can’t take the dogs to my mums as although she is fine with our cat (now!) she will chase unfamiliar cats, so we have to factor in kennel costs to any ‘flying visit’. We can no longer socialise with friends with dogs as we never know who she’ll have a problem with. She’s very highly strung and the complete opposite to Layla who is very chilled. She’s a lot better than she was but she’s still very hard work. If I were to rescue again I wouldn’t take a dog without knowing a bit more about it’s background as it’s been a steep learning curve.

Thank you so much for taking the time to share your story of your rescue dog, Bonnie.