Learning about canine body language can help you bond with your dog. It can also help you understand other dogs that may not be so familiar to you. Knowing when to approach other dogs and when to stay away can keep you safe whilst out and about. Here we examine some dog body language and look at how human body language can make all the difference in our canine relationships.

Let’s start by imagining a dog out for a walk with their owner when they are approached by another dog walker. 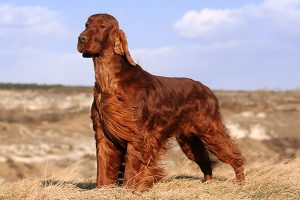 Signs of a Happy Dog

A happy, relaxed dog will have a loose stance with head held high, tail in its natural position and ears pricked. As the relaxed dog moves into being alert and assessing the animal or person approaching them, their body language changes. The tail comes up and the ears move forward. To aid their assessment, the eyes widen, the ears may twitch and the stance leans forward. The tail might move slightly as well.

A dog that recognises those approaching or feels confident about the approach of another person or dog, may move into being playful. The mouth opens, the ears go up and the tail wags. The forelegs bend and lower in readiness to move in play and the dog may also run about and then return to this position. This body language is an invitation to join in, ‘Come on, come and play with me,’ the dog is saying. 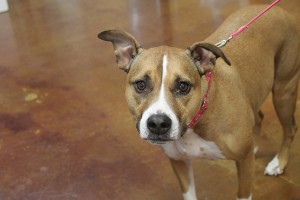 Signs of a Threatened Dog

On the other hand, if the dog perceives the approaching dog or person as a threat, their body language can change in a few different ways. A dog that feels able to deal with a threat will display aggressive, confident body language. The stance stiffens and the tail rises and bristles. The dog’s hackles also rise and the ears move forward and spread. There may be wrinkles visible on the dog’s forehead and nose, whilst the lips curl to bare teeth and gums. A threatened, but confident, dog may even wag his tail. However, all its other body language will display aggression not friendliness.

A dog that feels threatened and is also fearful will display their aggression in a slightly more defensive way. The hackles still rise and the nose wrinkles with curled lips. However, in contrast, the body lowers, the ears move back and the tail tucks under. They also avoid eye contact, turning the head to do so.

Other signs that a dog is under stress include yawning, lip licking, sweaty foot pads and freezing.

When responding to dog body language, it is vital to take the whole dog into account. Relying solely on whether the tail is wagging, for instance, could lead to a nasty encounter if the rest of a dog’s behaviour displays aggression. A dog that is feeling threatened, whether confident or nervous, still has the ability to attack. Therefore, even if you identify a dog as feeling fearful, it is still important to keep your distance. They could attack out of fear. Similarly, displaying the whites of their eyes can have conflicting meanings. If a dog is otherwise relaxed and playful, then seeing the ‘sclera’ is simply symptomatic that your dog is moving their head but maintaining eye contact. If a dog is also showing aggressive or fearful body language, then ‘whale eye’ is their way of turning their head without taking their eye off the threat. 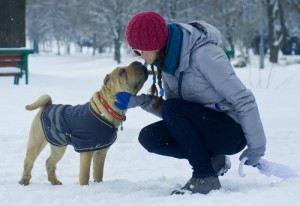 Additional information for this article was researched from Modern Dog Magazine, Pet MD and the Association of Pet Behaviourists and Counsellors.