The pugnacious Bulldog is the focus of our latest breed profile. Full of character and fighting spirit, it became a symbol of Britain and remains popular today. 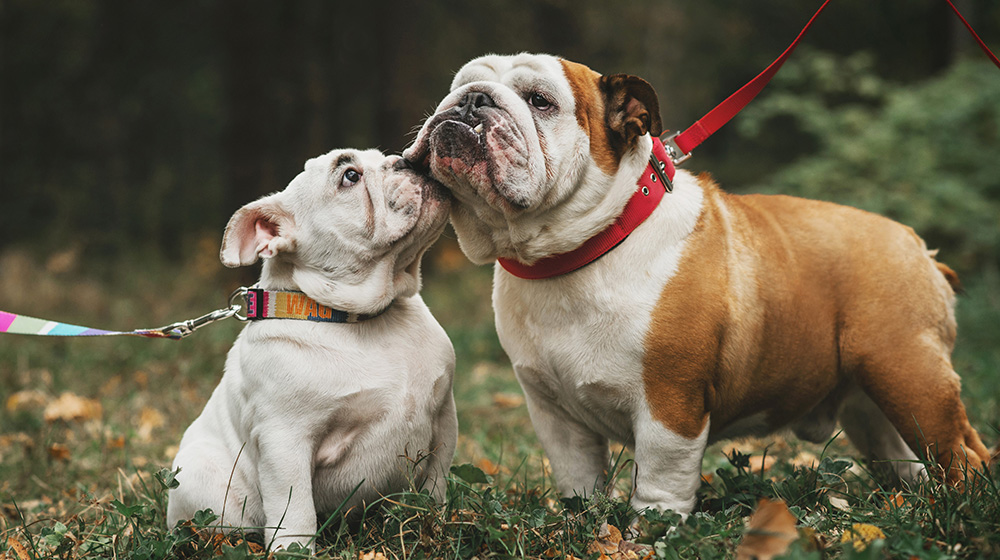 History of Breed: The Bulldog’s origins lie in the ancient ‘entertainment’ of bull baiting, which was introduced by the Normans and used short thick-set versions of mastiff-type breeds. Thankfully, bull baiting was made illegal in 1835, though this threatened the existence of the now-defunct Bulldog. However, the rise in popularity of dog showing in the 19th century saved the breed, which swiftly became a symbol of Britain. Bearing a likeness to Winston Churchill, as well as possessing a sturdy character and fighting spirit, the Bulldog has often appeared to be synonymous with the essence of what it is to be British.

Features: The Bulldog is one of the most easily recognised breeds thanks to its characteristic stance and features. The hind legs are longer than forelegs, which are thick, short and set far apart. It has a broad, deep chest and muscular shoulders. The overshot jaw, in which the lower jaw is longer than the upper jaw, gives it a determined, stubborn look. The Bulldog’s distinctive brachycephalic face has an upturned nose, ‘rope’ of wrinkle over the snout and thick pendant lips. The breed has a large head and high set rose ears. The curving back leads to a downward curving tail that should never curl up over the back. The coat is short and smooth coming in a variety of colours, but never black, black and tan or dudley.

Energy Levels/Exercise Required: Bulldogs require about an hour of exercise per day. They have a tendency to gain weight, which puts strain on their joints, so they need enough exercise to keep them at the ideal weight. Feeding to condition is a great way to maintain a healthy weight. Gilbertson & Page recommend Gilpa Slimline during a period where weight loss is desirable and Dr John Silver with Chicken as a lighter maintenance diet.  Brachycephalic breeds, such as the Bulldog, have trouble regulating their temperature in hot weather due to shortened nasal passages. In warmer months, exercise should take place at the coolest time of day. Dogs need to cool down gradually in shade, drinking cool not cold water. Bulldogs sweat through the pads of their feet, so will enjoy cool, tiled flooring to allow them to do this.

Potential Health Problems: Dysplasia is a common health problem for this breed. This inherited condition can start earlier if dogs are overweight or if puppies are overexercised. It is important to prevent puppies from going up and down stairs or jumping, which puts strain on developing joints. As above, feeding to condition with a nutritionally-balanced dog food, should prevent weight gain which exacerbates hip dysplasia.

Bulldog puppies are usually born by caesarian section due to their large heads. The folds on their face and their curling tail needs monitoring and regular cleaning to avoid infections and sores. Bulldogs can develop breathing problems due to their brachycephalic faces. Regular check ups with an experienced vet will highlight problems early.

There has been a lot of campaigning in recent years to prevent Bulldog characteristics becoming extreme and problematic through breeding. The shortened nose, overshot jaw, forelegs and gait are all characteristic of the breed, but can cause health problems if allowed to become too extreme. The Kennel Club has wisely revised its breed standards for the Bulldog in an effort to make animal welfare a priority.

Temperament: The Bulldog has a stubborn streak and a protective instinct and needs an experienced owner. However, they are also loyal, dependable, brave and affectionate. Thanks to responsible breeding, today’s Bulldog is now a calmer, friendlier dog. With thorough socialisation in puppyhood, they should not be aggressive or vicious.

Child Friendly/Family Dog: Bulldogs can be great family dogs and build a good relationship with children. However, socialisation and training is vital. The breed does not require large amounts of space in the house or outdoors and is equally at home in town or country.