If it’s possible to describe a dog as ‘on trend’ then the Pug is one animal that deserves that description. From cups to cushions and slippers to smartphone cases, the Pug’s characteristic face is visible in every retail marketplace. So we decided to jump on the bandwagon and cover them in our breed profiles.

History of the Breed: The Pug is an ancient breed and a member of the ‘toy’ group of dogs. It possibly originated in the Orient, where snub-nosed dogs have been popular for centuries. Although the breed arrived in Europe with Dutch East Indian Company traders during the 16th century, it didn’t arrive in England until William III came to the throne in 1689. Pugs have a long association with royalty and the aristocracy and they were a particular favourite of Queen Victoria. More recently they have become popular in all walks of life, probably due to their good nature and robustness. In old paintings Pugs are taller and leaner than the modern Pug, though they share the same facial characteristics. 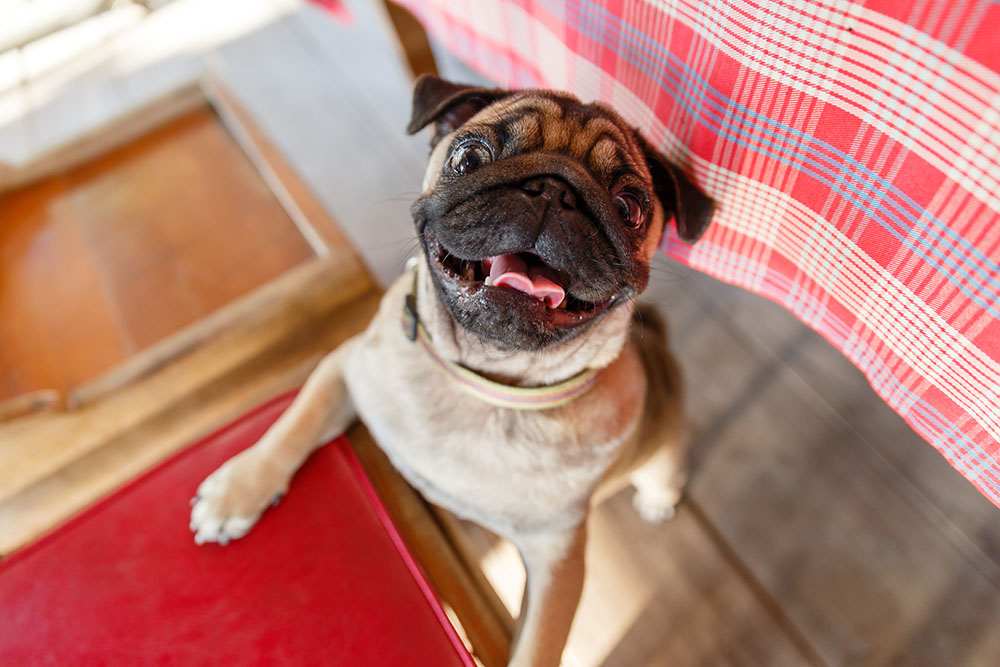 Features: The Pug has a characteristic snub-nosed face and lustrous eyes. Its fine, smooth, short, glossy coat comes in four colours, commonly fawn or black, less commonly silver or apricot. The tail should curl over the hip and a double curl is highly sought after. Pugs have a large head, which remains in proportion to the body. Their recognisable short, blunt, square muzzles have a black nose with large, open nostrils. There are defined wrinkles on the forehead above large round, dark eyes, which should never show white when looking straight ahead. Pugs are also notable for their small, dark, velvety ears, which either present themselves as ‘button ear’ with flap folding forward or ‘rose ear’ folding over and back. Strong, straight, medium-length legs under a short ‘cobby’ body give the Pug its robust appearance.

Energy Levels/Exercise Required: A smaller dog generally requires less exercise than a larger dog, though this isn’t the case with every breed. Pugs require about half an hour a day. This makes them perfect for busy families, those who aren’t as physically active or those with little or no outside space. As a more sedentary breed, Pugs have a tendency towards obesity, so it is essential to feed to condition and maintain some exercise and activity every day. An ideal dog food for controlled weight loss would be Gilpa Slimline, which has lower levels of fats and oils without skimping on essential Omega 3 and 6. For a dog without weight issues, Gilpa Trinkets would be a good choice. It has a smaller biscuit and is designed to suit the mouth size of small dogs.

Temperament: Sociable and fun, Pugs are full of character as well as loyal and intelligent.

Possible Health Problems: Eye injuries can be common due to a lack of skeletal protection in the form of a prominent brow ridge around the eyes. As previously mentioned, Pugs have a tendency to be overweight, which can put pressure on loadbearing joints and the heart. Breathing difficulties can also present themselves, especially during hot weather, in snub-nosed or brachycephalic breeds.

Family Dog/Child Friendly: Pugs make great family dogs, being good natured, sociable and fun. They are not typically aggressive, but are robust enough to enjoy boisterous games with young children. They are well suited to young and old alike and make firm, loyal companions.

Dislikes: Being lonely or bored (don’t we all!).