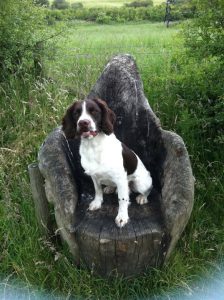 The English Springer Spaniel is not for the faint-hearted! Boundless energy and enthusiasm make this popular breed a tiring, but rewarding choice.

History of Breed: The English Springer Spaniel is descended from the Norfolk Spaniel and is one of the oldest gundog breeds. For many years Springer and Cocker Spaniels came from the same litters. The smaller ‘cockers’ were used to hunt woodcock, whilst the larger ‘springers’ were used for flushing or ‘springing’ game. The two gradually became more distinct and this gundog breed took the name of English Springer Spaniel in 1900. It was officially recognised as a breed in its own right by the Kennel Club in 1902, though the breed has separate showing and working lines. The breed is popular for rough shooting due to their tireless energy for rushing about, flushing and retrieving game. However English Springer Spaniels are also popular with energetic families and individuals who enjoy outdoor activities. They have excellent noses and so are also widely used as sniffer dogs.

Life Expectancy: Over ten years, about 12-15 years on average.

Size: A medium dog. Breed standards dictate dogs should be 51cm at the withers and bitches should be 43-48cm. Working dogs tend to be lighter and finer than showing dogs.

Features: English Springer Spaniels have dark hazel eyes set in a fairly broad, rounded, well-proportioned head with flat cheeks and rounded nostrils. This gives them their kind, alert expression. The body and legs are also well-proportioned, with a deep chest and strong, well-developed legs. The coat is weather-resistant and comes in liver and white, black and white and either of the two with tan markings. There is characteristic feathering to the lobular ears and legs. Regular grooming sessions combined with clipping when needed help prevent knotting and matting. This is vital on the ears where bits of twig and other greenery can work their way into the ear canal and cause nasty infections. Increased oils can help with coat texture and shine.

Energy Levels/Exercise Required: Spaniels as a breed group are all highly active, but the English Springer Spaniel is practically hyperactive! It will require plenty of exercise, typically more than two hours a day. This is particularly important if they are a non-working dog to prevent behavioural problems caused by boredom and excess energy. A dog food such as Dr John Titanium should keep an English Springer Spaniel in peak condition. It is nutritionally balanced, as well as containing a joint and bone complex; perfect for a high energy dog.

Potential Health Problems: Rare Rage Syndrome can affect show dog lines. Typically, a sudden display of aggression towards other dogs or humans is followed by the dog zoning-out. The cause is thought to be a neurological short circuit in the brain. Some dogs have specific triggers, which should be avoided, but others can be completely unpredictable. Epilepsy treatments including dietary changes can help. Dogs are usually fed a ketogenic diet (based on fat rather than carbohydrate), supplemented with Omega 3. Other potential health problems include hip and elbow dysplasia and progressive retinal atrophy (PRA). Hip and elbow dysplasia can be exacerbated when a dog is overweight, so it is important to feed to condition. Overweight dogs can benefit from a lighter dog food, such as Dr John Silver Chicken. The Kennel Club recommends genetic screening prior to breeding to rule out genetic disorders related to the breed.

Temperament: The English Springer Spaniel is typically a friendly, affectionate and happy dog. The breed is highly intelligent and responds quickly to training. It is vital that training is carried out early and consistently along with good socialising. The breed can also be anxious and suffer separation anxiety and destructive behaviour, such as chewing. Diet can help with this. Lower protein diets alongside supplemented omega 3 can help reduce anxiety and hyperactivity. However, good training and behavioural work will also be necessary to work through these issues. Many behavioural problems can have their roots in lack of exercise.

Family Dog/Child Friendly: English Springer Spaniels make great family dogs in busy households with older children, where plenty of time is spent outdoors. Whilst space inside needn’t be large, a good-sized garden will provide ample space to run off excess energy. Alternatively, an English Springer Spaniel will thrive living in close proximity to wide open rural spaces such as fells or beaches. The breed’s instinct to hunt small furry creatures makes them unsuitable for households with pets such as cats or rabbits.

Dislikes: Being cooped-up indoors, lack of exercise, lack of attention. 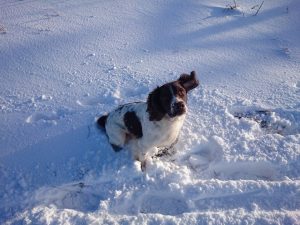