Our latest Breed Profile features one of the country’s favourite breeds and one of the most familiar of the Terriers – the Border Terrier. Being a fun and less-demanding dog to own, it’s easy to forget that they’re also tough and wily characters. 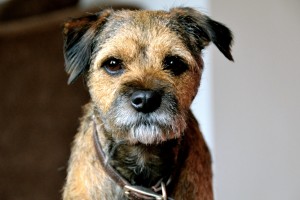 istory of Breed: An ancient dog breed, terriers were originally bred for hunting foxes and other vermin. The Border Terrier in particular has long enough legs to keep up with hunters on horseback but is small enough to fit down fox holes and burrows. Originally known as Coquetdale or Redesdale Terriers, they soon became known widely as Border Terriers due to their links to the Border counties of Scotland and England, in particular the Northumberland Border Hunt. Despite being around since the late 19th century, Border Terriers were only recognised as a breed by the Kennel Club in 1920.

Features: Dark, lively eyes and small, v-shaped ears that drop close to the cheek give the Border Terrier its characteristic ‘cheeky chappy’ expression. An impression of sturdiness comes from the long legs and solid body. The thick, wiry coat comes in red, wheaten, grizzle and tan or blue and tan. It has a thick undercoat which offers good protection from the elements.

Energy Levels/Exercise Required: High energy dogs, Border Terriers are fast and agile, jumping surprisingly high for a small dog. They respond excellently to training and perform well in agility classes. About an hour of exercise a day is recommended, though they have the stamina to cope with longer. Smaller breeds usually need a small biscuit to suit their smaller mouths. As a small active breed, Gilpa Trinkets will provide all the energy the Border Terrier needs in a small biscuit.

Potential Health Issues: Generally a very healthy, tough breed, the Border Terrier can be at risk of developing some genetic conditions. Hip dysplasia, Perthes disease, progressive retinal atrophy and seizures are all worth mentioning to a breeder. Hip dysplasia can be exacerbated when a dog carries too much weight. A dog food such as Gilpa Slimline is specifically designed to aid weight loss in overweight dogs. It is lower in fats and oils than other feeds, whilst retaining all the essentials for a nutritionally-balanced diet.

Temperament: This breed can be stubborn and strong-willed, but are generally good natured and even-tempered. They are very intelligent and learn tricks quickly, which makes them fun to be around. They are rarely aggressive.

Family Dog/Child Friendly: The Border Terrier makes a great family dog. They are well suited to smaller homes and do not require a large amount of outdoor space. Their friendly temperament makes them more tolerant of children than most terrier breeds. They may instinctively chase cats and other smaller animals.

Dislikes: Being bored and left to their own devices. 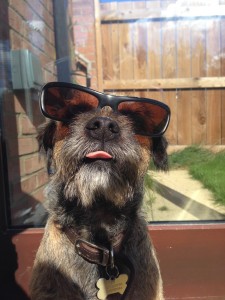