This time around, our breed profile focuses on a breed with a rather esoteric-sounding name that’s actually a real “dog’s dog”. The Large Munsterlander is a large and relatively powerful dog that’s also capable of being a great family member, especially if if they get lots of interaction and exercise. 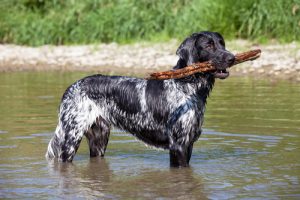 History of Breed: The Large Munsterlander is actually more closely related to German Longhaired Pointers than the similarly named Small Munsterlander and is one of a large number of versatile gundog breeds that became popular for ‘rough shooting’ in the UK from the 1950s onwards, when there was an influx of breeds from Europe. They were first recognised by The Kennel Club in 1971. Whilst similar dogs can be seen depicted in art dating back to the Middle Ages, the breed was first officially recognised in the early 1900s in the Munsterland in north west Germany, hence the name.

Size: A large dog, breed standards dictate dogs and bitches should be the same length in body as their height at the withers, which explains their beautiful proportions. This should be 60-65cm for dogs and 58-63cm for bitches.

Features Characterised by the long, dense coat with distinctive feathering on the legs and tail,

Energy Levels/Exercise Required: As with all gundogs, Large Munsterlanders have been bred to have the stamina to withstand long days out hunting and being almost constantly on the move or alert. The exercise they require reflects this and any potential owners need to be prepared to put a lot of effort into exercising, training and providing adequate mental stimulation for such an intelligent, active dog. Over two hours of exercise a day is necessary to keep these dogs entertained and to prevent them becoming bored, which can lead to behavioural problems for any dog.

Potential Health Problems: Hip dysplasia and eye problems can occur later in life. Hip dysplasia in particular can be exacerbated by a dog carrying too much weight, so feeding to condition with a nutritionally balanced dog food that contains a joint and bone complex, such as Heritage Adult or Dr John Titanium for working dogs can go a long way to holding off hip problems. Gilbertson & Page dog foods also contain zinc, which is essential for healthy eyesight, a must have for working dogs like gundogs and sheepdogs that rely on their sight to ‘work’.

Family Dog/Child Friendly: Large Munsterlanders make great family dogs thanks to their gentle, obedient natures and are perfectly suited to a busy family home where plenty of time is spent in outdoor activity. Large Munsterlanders would not be happy in a household where they are left alone in the house for long periods, so potential owners who work out of the house all day should consider another breed of dog. A physically small house would also prove a challenging environment for a Large Musnsterlander. Like all gundog breeds, Large Munsterlanders are bred to hunt and pick up small furry or feathered creatures, which could make them unsuitable for a home with lots of smaller pets, though their obedient nature would also make this aspect easy to keep an eye on.

Dislikes: Lack of exercise and attention, being cooped-up indoors for long periods.