HomeA Dog's LifeDiary of a Gun Dog Episode 9: Didn’t He Do Well?

Diary of a Gun Dog Episode 9: Didn’t He Do Well?

Having put a huge amount of time and work into Oscar’s training ready for the pheasant season starting, it’s time to find out if it all came together on Oscar’s first shoot of the season a couple of weeks ago. In Episode 9 of our series in which we follow Oscar, a yellow Labrador, from puppy to adulthood, it’s time to see how he did.

Oscar had plenty of practice retrieving pigeons and ‘dummy’ pheasants over the summer and early autumn. This continuous reinforcement of his training has really paid off now that the pheasant season has started. Apart from one small incident where Oscar dithered between two birds to retrieve (a big no-no for a retriever!), Mr R says it was Oscar’s best performance yet, as these gorgeous pictures prove, and it looks like he’s really played his part of peg dog successfully.

Mr R and Oscar were meant to be out on another shoot today, but unfortunately Oscar has a limp, so they’ve had to give it a miss this time. The cause is unknown, though it has happened once before, and they’re hoping Oscar will be back to his old self in time for a big shooting trip to Scotland in a couple of weeks with Mr R. I’m sure he’ll be expecting the same stellar performance from Oscar on this trip as he saw on his last shoot. 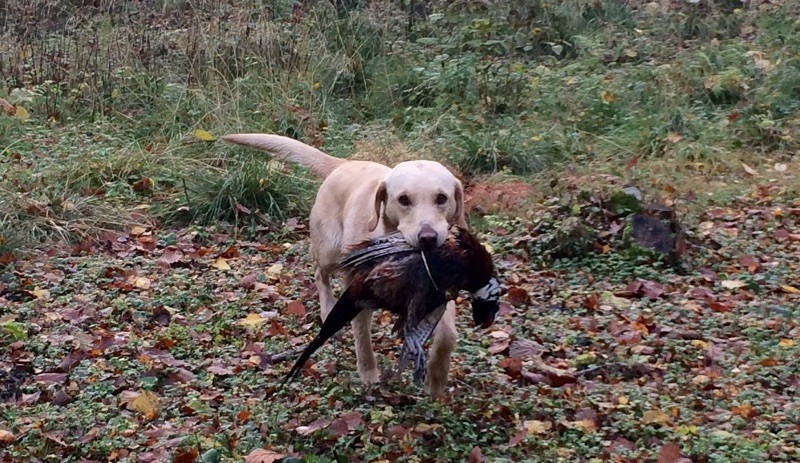 I worked my paws off on our first pheasant shoot of the season, retrieving plenty of game and getting lots of praise from everyone, not just Mr R. They were really proud of me and I was really proud of myself too.

Unfortunately, I’ve hurt my leg and have a bit of a limp, so I’ve had to miss a shoot that I was looking forward to and have to rest a bit. There’s a big shooting trip to Scotland in a few weeks and I just have to be better for that. I’ll be so disappointed if I miss it.

Oscar Through My Eyes 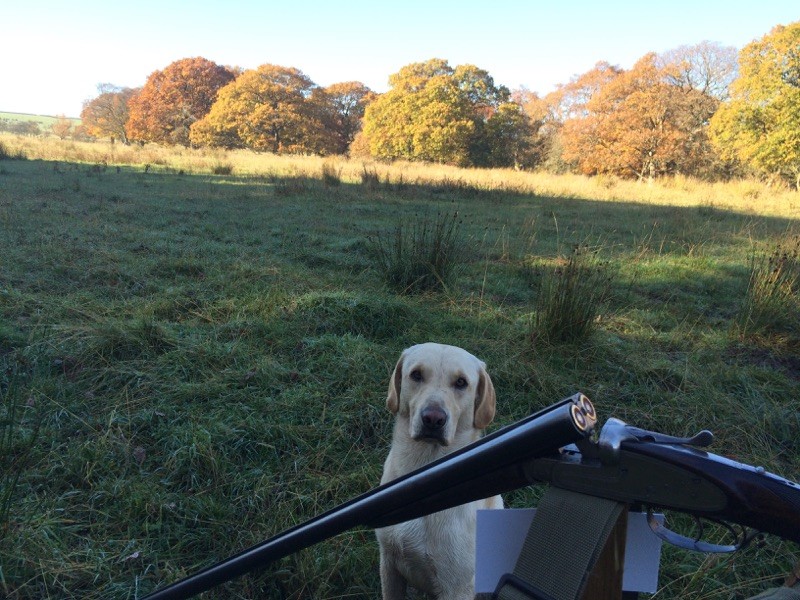 I’ve seen Oscar a couple of times a month since Mr and Mrs R got him, so I thought I’d tell you a little bit about him through my eyes. He always greets me at the front door full of beans, with his funny ‘hello’ grin, and places a paw on my arm when I bend down to stroke him. He has a face full of intelligence with a sensitivity about him that makes you feel a huge amount of empathy for him. If he is told off for any reason, his hangdog expression makes me feel genuinely sad. He is extremely well trained and obedient to the letter and will also obey commands given by the children, including our own three year old. It is clear that he is perfectly in tune with the humans around him and is unerringly faithful and loyal to his family. He loves attention and affection, but would never dream of jumping up to gain it. The hard work that Mr and Mrs R have put into training early on has certainly paid off, because you couldn’t ask for a lovelier dog.