After a year in which scandal hit the world’s biggest dog show, there were still plenty of positive vibes about at Crufts 2015 and Gilbertson & Page had one of the busiest years ever at the show. An astonishing 21,000 dogs competed in agility, obedience, flyball, breed showing and gamekeeper classes to name just a few. As well as heelwork to music, police dog displays and rally, the all-important Best in Show certainly gave spectators value for money.

Day 1 – Thursday 5th March – Gundog. Dublin, a Flat Coated Retriever from Sweden, won Best in Group in the Gundog category on the first day of Crufts 2015.

Day 2 – Friday 6th March – Working and Pastoral. An Alaskan Malmute named Bart won Best in Group for Working dogs, whilst Fayme, a Bearded Collie, won Best in Group for Pastoral dogs. Both dogs and their owners are from the UK. The winner of the Grand Finale was Gracie, a crossbreed who was found on the streets and now enjoys a loving home with her owner Alison. She takes part in agility, heelwork to music and is a Pets as Therapy dog. 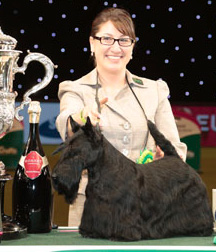 Day 4 Sunday 8th March – Toy and Utility. Winner of Best in Group for the Toy category was Sasha, a Maltese from Rome and winner of Best in Group for the Utility category was Miss Rose, a Miniature Poodle from Norway. Miracle, a rescue dog who is changing the life of a six year old boy with cerebral palsy, was pronounced the winner of the Friends for Life competition. Out of the 21,000 dogs who competed at Crufts this year, just seven went through to be judged for Best in Show. And finally, after much deliberating by judge Ronnie Irving, the prestigious Best in Show award went to Knopa, a Scottish Terrier, with Dublin, a Flat Coated Retriever taking Reserve Best in Show.

Additionally, on each of the four days of Crufts, in the Good Citizen Dog Scheme Ring, classes and displays focussed on the role dogs play as citizens in our society. Displays included the Guide Dogs for the Blind Association, Dogs for the Disabled, Pets as Therapy and Star Citizens heelwork to music amongst many others. As expected in the Dog Activities Ring showing and ringcraft took centre stage as well as agility, rally, obedience and working trials. In the Young Kennel Club programme, younger dog owners had a chance to compete against each other in starter, elementary and advanced obedience, handling, jumping, agility, grooming and heelwork to music classes that stand them in good stead as they progress through the ranks. Competition for prestigious awards such as the John MacDougall award or the Cinnamon Trust Volunteer award is no less serious in the Young Kennel Club than in the adult groups.

Crufts 2015 turned into a fantastic event and was probably busier and more exciting than ever, despite the well-publicised problems. We’re looking forward already to Crufts 2016!